Frayser Hawkins, a U.S. Navy Veteran and native of New Albany, is the first Gold Star family member to be selected for the fellowship.

Kelly said, “It is an honor to give a voice on Capitol Hill to Gold Star families.  Frayser is an excellent advocate for these men and women. His distinguished military career, coupled with a love for God and Country, will play an essential role as we formulate meaningful legislation on their behalf.”

“I am thankful for this opportunity to advocate for Gold Star families and Mississippi’s First Congressional District,” Frayser said. “I’m looking forward to serving both Veterans and all Gold Star Families.”

Cooley died in Iraq in 2005 when his vehicle was struck by an improvised explosive device. He was assigned to the 150th Engineer Battalion, 155th Armor Brigade of Lucedale, Mississippi.

The U.S. Department of Defense said Horton was killed September 9, 2011, when his unit came under attack from small-arms fire. He was a member of the 45th Infantry Brigade Combat Team.

Members of the U.S. House of Representatives passed H.R. 107 in October 2019. The legislation established a twelve-month, fully-funded fellowship in a Congressional office for siblings, spouses, or children of service members who have lost their lives in service to America. 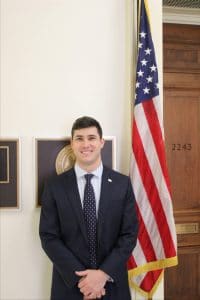