Image above: U.S. Marine Capt. William Agudelo (right) helps hand out candy to children during a local patrol in Afghanistan during his deployment. Agudelo, a recent graduate of the online Master of Criminal Justice program at the University of Mississippi, has been studying long-term negative effects associated with the nation’s juvenile detention system. (Submitted photo)

The rates of juvenile detention across America have dropped dramatically over the past decade, but over-reliance on detention facilities for youth offenders remains a major problem for society, according to data compiled by the National Institute of Justice.

Also, racial disparity is a serious concern, with far more Blacks and other nonwhites sent to detention centers than whites, and youth suffering from mental health issues often ending up in detention rather than treatment facilities.

William Agudelo, a recent graduate of the online Master of Criminal Justice program at the University of Mississippi, conducted a capstone project that gathered real-world research highlighting the long-term negative effects associated with juvenile detention.

Kimberly Kaiser, an assistant professor of criminal justice and legal studies and graduate program director, inspired Agudelo to join the program. “When Will first joined our master’s program, it was clear from the beginning that he had a great enthusiasm for learning, and he always had a positive approach to the many challenges of graduate school.”

“This was reflected in his capstone project where he was able apply the skills and knowledge he developed in our program to write a high-quality, research-informed capstone project on this important topic,” said Kaiser.

“The importance of recognizing the value in alternative sanctions is the first step in improving the youth justice system and improving outcomes,” Agudelo said. “Our kids should be at the forefront of everything we do – to include those who may be brought up in unstable environments and exposed to less favorable conditions.”

Youth who have been confined in detention centers are very likely to relapse back into criminal behavior, previous research from the National Institute of Justice indicates. Once juveniles enter the justice system, they are instantly at a disadvantage and their chances of becoming successful, productive members of society begin to diminish.

The justice system continues to rely on confinement – low-risk juveniles and pre-trial confinement continue to make up the majority of juveniles assigned to detention facilities, according to the Prison Policy Initiative. The racial disparity in the system reflects issues rooted in structural inequality and a lack of support and resources in communities of color.

Research conducted by the Prison Policy Initiative has yielded suggestions to improve youth outcomes and reduce relapses into criminal behavior through alternative programs, such as a focus on reinforcing families to reduce problem behavior in youth. Evidence shows that stable, strong families provide an early impact on family bonding, school bonding, and reduction in delinquency and conduct disorders.

Further, the initiative’s research suggests that family treatment, in comparison to other diversion programs, is one of the most effective methods to reduce recidivism among juvenile offenders and create more positive outcomes.

“Our nation, in some regions more than others, continues to face issues with youth in the justice system,” Agudelo said. “I would encourage people to explore different avenues to become involved. There are a variety of different programs where we, as mentors, can engage with children in at-risk communities. The opportunities are everywhere – you just have to look.”

Based on the findings in the research and the data examined, Agudelo discovered a series of recommendations available for leaders in the juvenile justice system, advocates for change and reform, and key stakeholders that provide a detailed plan to rehabilitate at-risk juveniles and increase the chances of their successful reintegration back into society.

“First, maintaining statistics at the national level will provide researchers with the data necessary to better understand and define the scope of the problem,” Agudelo said. “Second, the engagement of stakeholders is critical in creating shared and increased situational awareness, promoting collaborative ways to devise and implement new treatment alternatives. This requires cooperation across all echelons – including state and local agencies, departments of children and families, mental health, probation service, police departments and the community school system.”

Third, Agudelo emphasized that proper funding is a key feature in using evidence-based programs – programs based on research and documented results – for delinquent youth. “The potential cost-in-savings is an aspect of alternative programs – especially in long-term analysis – that has been advocated by policymakers,” Agudelo said. “The focus on resource allocation and funding needs to be directed to alternative programs, like providing trained therapists.”

Agudelo continued by saying, “The fourth recommendation is in corroboration with a psychiatrist professional, a baseline mental health assessment is recommended before initiating the treatment plan. Research suggests that mental health needs are related to recidivism and delinquent behavior. This data should be utilized to inform policies, practices, and programs.”

Finally, Agudelo recommended that policymakers identify communities of color and neighborhoods where a high percentage of households are led by single parents, and use that information to allocate resources and support.

Agudelo grew up in Brentwood, Long Island, and moved to North Carolina when he was 16. He studied political science and criminal justice at the University of North Carolina at Charlotte and joined the U.S. Marine Corps after graduating in 2012. As a Marine, he was trained in military policing and then specialized in forensics for the latter half of his military career. He spent 10 months in Afghanistan leveraging his skillset with a small task force in Helmand.

Agudelo credits the online Master of Criminal Justice program with equipping him with a deeper understanding of the justice system as he looks to transition into the government sector. “It has also opened a lot of doors to higher level opportunities. The many relationships you will make throughout the program are certainly both meaningful and impactful.”

Story submitted by the University of Mississippi Office of Communications 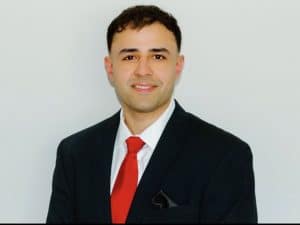