On Friday morning, Tougaloo College hosted a virtual panel discussing COVID-19 and its impact on minorities.

In the few minutes that Fauci stayed on the Zoom call, the chief medical advisor to the Biden administration stressed to viewers that the vaccine is, in fact, safe and there’s no reason to be fearful based on politics.

“The determination of whether the vaccine is safe and effective is not made by the federal government,” Fauci stressed. “It’s not made by [Pfizer or Moderna]. It’s made by an independent data and safety monitoring board who is beholden to no one…The ones who determined whether it was okay to distribute it to the American public are the career scientists—not politicians.”

According to Dobbs, vaccinations within the Black community are up from 13% to 21%. Nevertheless, he stressed that we should not be content with those numbers as there’s still progress to be made within all minority groups.

“Although we were kind of off to a sluggish start, we are starting to tick up in the percentage of folks who are African American getting the vaccine,” Dobbs said regarding the 8% rise. “That’s not okay, but it’s progress, and we do have strategies going forward.”

Vaccine trust was a major talking point for Dobbs as he released a new chart in which 72 percent of Mississippians plan to take the vaccine while 16% do not. The other 12% are still unsure. Delving more into those numbers, the MSDH found that white Mississippians are more willing to get vaccinated in comparison to Black and Latino Mississippians.

“We see a significant difference in those who will definitely take it between white and Black Mississippians,” Dobbs continued. “Not only do we need to get the interest within Black folks up from 39.9%, but we need to get everybody up.”

Some of the solutions that Dobbs presented to increase not only the trust but vaccine distribution within minority groups were working with church leaders, as well as the creation of a new program in the City of Jackson.

Currently, 1.4 million Mississippians—over half of the state’s population—are eligible for the vaccine. To find out if you qualify, click here, and to watch the full discussion from Friday, check out the video below. 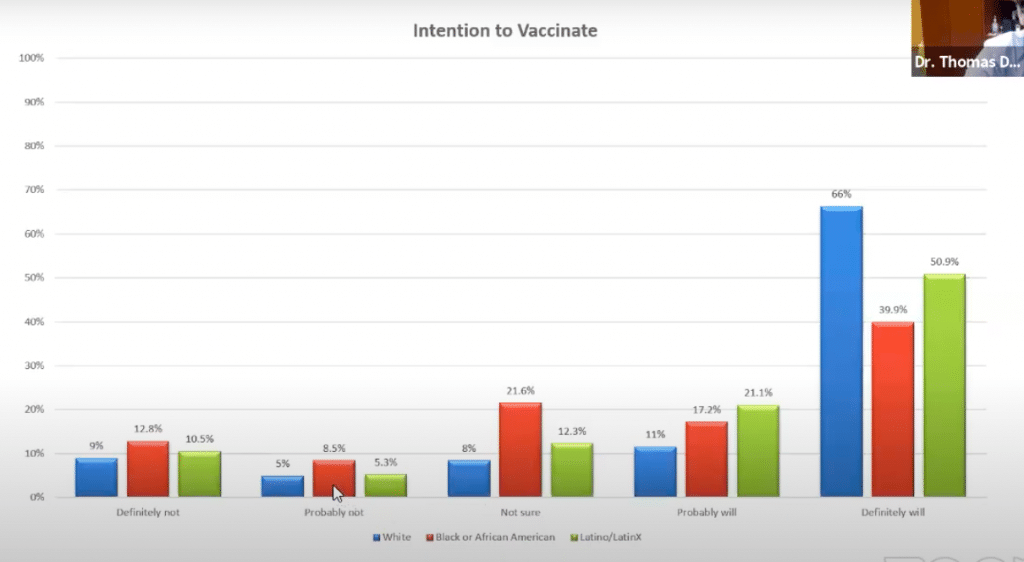