Committee deadline day at the capitol has come and gone with a large portion of the over 2,200 general bills introduced meeting their end.

A few key bills that survived Tuesday’s deadline include:

SB 2765 – A bill to create the ‘Mississippi Medical Cannabis Act’ which would operate alongside Initiative 65—the medical marijuana initiative adopted by voters in November.

HB 997 – A bill aiming to privatize the distribution of alcohol in Mississippi. The Department of Revenue currently operates the Alcohol Beverage Control program in the state.

SB 2678/HB 633 – A pair of bills that would lead to the implementation of a mandatory computer science curriculum in each of Mississippi’s 884 K-12 public and charter schools for all of the state’s 442,627 students.

HB 1135/SB 2804 – These bills would clear the way for the allowance of the delivery of beer, liquor and wine in the state of Mississippi.

HB 1030/SB 2313 – Mirroring the efforts on a national level and in several other states, these pieces of legislation aim to allow college athletes in Mississippi to receive compensation for their name, image and likeness.

While there are certainly many others that didn’t make it, the following are a few notable bills that failed to make it out of committee.

HB 451 – A criminal justice reform bill, this legislation would have revised the process to restore the voting rights to disenfranchised Mississippians who have served their sentence with the exception of those convicted on rape or murder charges.

SB 2732 – This legislation would have expand sports gaming to mobile platforms and open up the possibility for FanDuel, DraftKings, and other national sportsbooks to operate in Mississippi.

HB 278/SB 2202– A priority of Lt. Governor Delbert Hosemann, these bills would have created a private/public partnership aimed at funding the repair, renovation, and upkeep of Mississippi’s state parks.

Floor debates are now underway in both the House and Senate after a relatively quiet session to this point with the only two significant bills being passed including a Senate bill to raise teacher pay and the ratification of the new state flag. 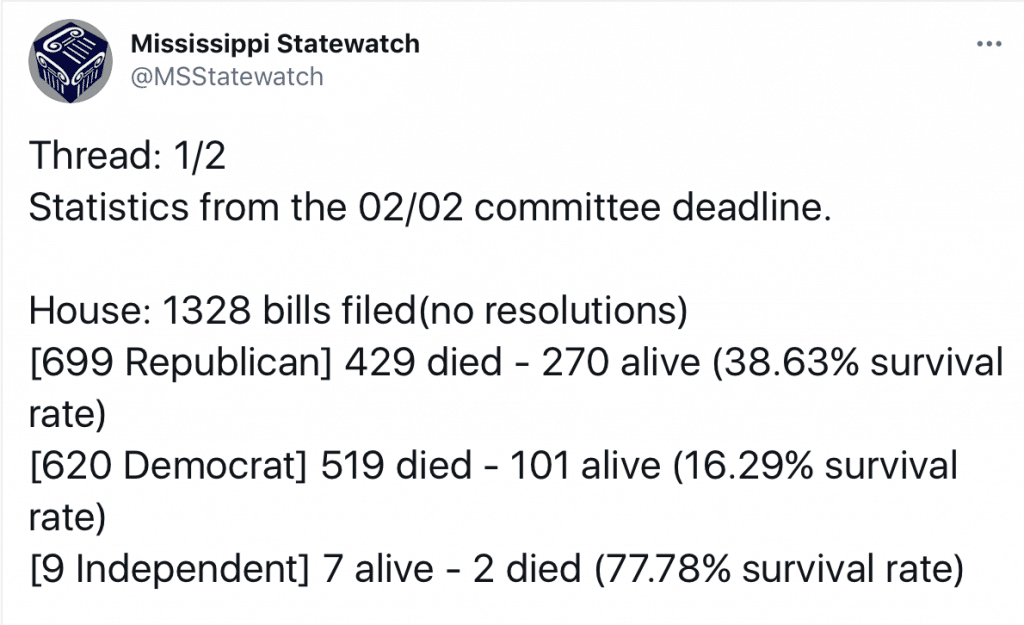