While players and coaches at Ole Miss, Mississippi State, and Southern Miss are gearing up for the 2020 football season, so is KLLM Transport Services.

The Mississippi-based company, founded in 1963, has unveiled the 2020 tractor-trailers for each of the state’s major college football programs. This is the first time in the company’s history that they have supplied the trailers that will carry the equipment for all three programs — the 11th year for USM, second for Ole Miss, and the first for Mississippi State.

President and CEO Jim Richards, a native Mississippian, is grateful for the opportunity to help showcase the state as these trucks travel across the country.

“I love the state of Mississippi, and I always want us to be first-class anytime we’re represented around the country. So many people have a different view of our state, and anytime we get an opportunity to change an opinion or a view then we love to play a small part in that. I think these trucks, when they roll into Tuscaloosa or Auburn or anywhere, I can promise you that they’re going to look first-class and we’re going to try and outdo everybody that we run up against,” he said.

Typically a costly expense, KLLM provides the brand-new truck & trailer, fuel costs, and a driver for all three programs. Each program submits its design for the truck and the company takes care of the rest.

As for who’ll be behind the wheel of each truck, three off-duty Mississippi Highway Patrolmen will be the ones transporting the program’s valuables from A to B. At the beginning of the partnership between KLLM & USM, an off-duty patrolman expressed interest in driving and after adding Ole Miss and Mississippi State to the fold, Richards knew just who to ask. After reaching out to the MHP, he quickly found two new drivers.

“I can’t think of a better group of folks to have driving these trucks from a safety standpoint and from a regulation standpoint. We don’t take any chances on that kind of stuff, so we’re very happy to have those guys representing us. Each one of them individually are huge supporters of the school that they drive for, so that also works well,” Richards said.

Despite the uncertainly surrounding this year’s college football season, Richards said that with these orders having been placed around 10 months ago, they had to push forward. 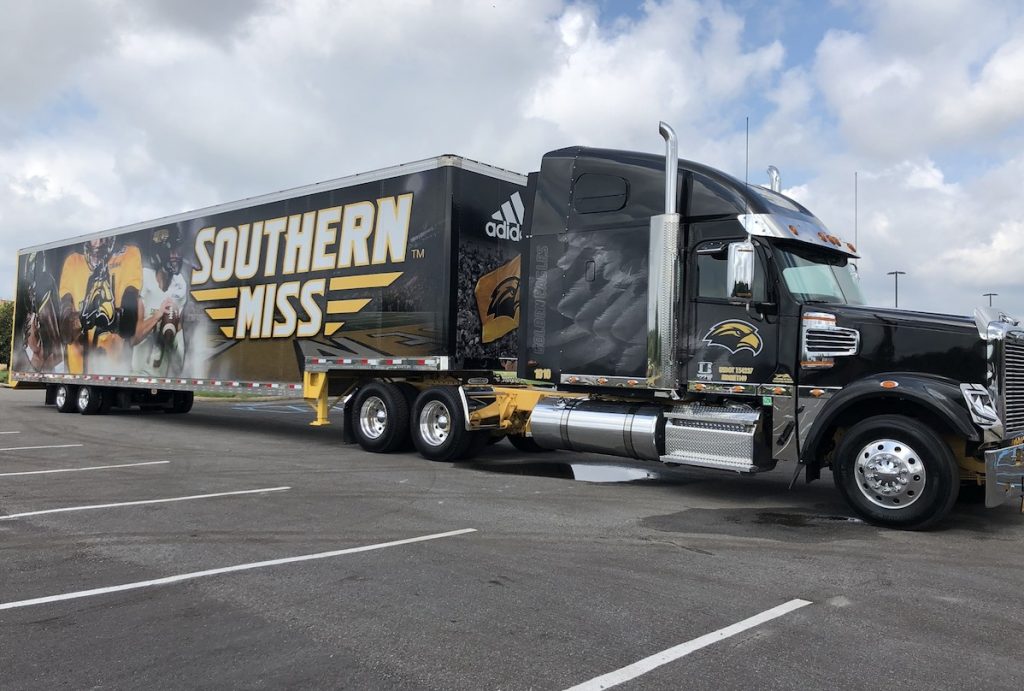