In the photo above, Harmon heaves around on a messenger line during a replenishment-at-sea with the Military Sealift Command fleet replenishment oiler USNS Yukon (T-AO 202).

Sterett is part of the Nimitz Carrier Strike Group and is deployed to the U.S. 5th Fleet area of operations to ensure maritime stability and security in the Central Region, connecting the Mediterranean and Pacific through the Western Indian Ocean and three critical chokepoints to the free flow of global commerce. 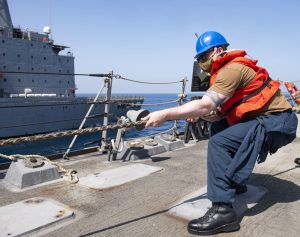