Since departing its homeport of Norfolk, Virginia in January 2020 for the ship’s Composite Training Unit Exercise, the aircraft carrier remained underway and deployed to the Arabian Sea, Red Sea, Mediterranean Sea, and the Atlantic Ocean.

Airman Brandon Frayde, a 2017 graduate of Crystal Springs High School, is an aviation boatswains mate aboard the carrier where he is responsible for the launch and recovery of aircraft on the flight deck.

“I truly enjoy my job, and knowing that I’m an essential part of the mission, is extremely rewarding” said Frayde.

As the COVID-19 pandemic spread across the globe, USS Eisenhower continued to conduct operations underway, minimizing the potential spread of the virus aboard in order to maintain maritime stability and security and ensure access, deter aggression and defend U.S., allied and partner interests.

USS Eisenhower, along with the USS San Jacinto (CG 56), one of the other ships within Carrier Strike Group (CSG) 10, remained continuously at sea with no port visits, setting a new record for the U.S. Navy, breaking the previous record of 160 days set in 2002 by USS Theodore Roosevelt (CVN 71).

“I’m so proud of the young men and women I see on the deck plates each and every day,” said Capt. Kyle Higgins, Ike’s commanding officer. “Their dedication to the mission is what makes our Navy the greatest fighting force the world has ever seen.”

“My biggest accomplishment during this deployment was earning my enlisted air warfare specialist qualification,” said Frayde.

USS Eisenhower participated in multiple exercises with allies and partners and dual-carrier operations. The ships within CSG-10 also completed multiple strait and choke point transits, to include the Strait of Gibraltar, the Suez Canal and the Bab-el Mandeb Strait, while operating under two Combatant Commanders – U.S. European Command (EUCOM), and U.S. Central Command (CENTCOM).

“My role on board this ship is to provide air support to all naval, air and ground missions,” said Frayde.

As a member of the U.S. Navy, Frayde, as well as other sailors, know they are a part of a service tradition providing unforgettable experiences through leadership development, world affairs and humanitarian assistance. Their efforts will have a lasting effect around the globe and for generations of sailors who will follow.

“I joined the Navy to get out of my small town and try something new,” added Frayde. “I also wanted to do something that could save a life.” 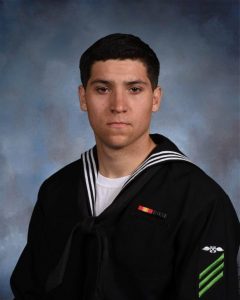