A budget resolution has passed the Senate, clearing the way for President Biden’s COVID relief package worth one-point-nine trillion dollars.

U.S. Senator Cindy Hyde-Smith voted against the Senate Democrat budget resolution that she criticized as a backdoor scheme for liberal big government spending.

Hyde-Smith said the Senate approved the FY2021 Budget Resolution (S.Con.Res.5) on a strictly party-line vote (51-50), signaling a sharp turn away from bipartisan agreements to deliver COVID-19 resources to families, the jobless, small businesses, and the healthcare sector.  The budget framework outlines $1.9 trillion in spending and tax provisions under filibuster-exempt instructions that could allow, among other things, nearly doubling the federal minimum wage.

“Veiled under the guise of COVID-19 relief, this budget resolution is really a backdoor scheme to rush through Congress a big government wish list that has little to do with defeating the coronavirus.  It is yet another signal since the inauguration that pledges of unity and bipartisan working relations continue to ring hollow,” Hyde-Smith said.

“I am not opposed to additional targeted funding to help overcome our national health emergency and rebuild the economy.  A lot of the money already provided by Congress still isn’t even out the door, which calls into question the rush to spend nearly $2 trillion more now,” she said.

Hyde-Smith pointed out that only about half the money for testing and a third of the funds available for vaccine distribution from the December COVID-19 relief package have been obligated.  Furthermore, since the start of the pandemic last year, Congress has provided almost $68 billion to support K-12 education and reopen schools, but only $4 billion has been spent.  (Backgrounder.)

The Mississippi Senator was also critical of the filibuster-exempt reconciliation instructions in S.Con.Res.5, which could allow Democrats to set a $15 federal minimum wage.  The nonpartisan Congressional Budget Office indicates this action would eliminate 1.3 million jobs.

“It’s hard to understand how anyone believes that in an economic downturn, the best thing to do is place new burdens on small businesses and accelerate job losses,” said Hyde-Smith, who voted for a Republican amendment to prohibit the increase of the federal minimum wage during a global pandemic.

The Senate-passed FY21 Budget Resolution must be reconciled with a House-passed measure before it can be finalized and then carried out by committees of jurisdiction. 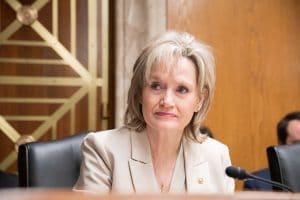