The ongoing dispute between Governor Tate Reeves and leadership in the state House of Representatives regarding a portion of CARES Act funding has come to an end with the Mississippi Supreme Court ruling in favor of the governor.

The decision by the state’s highest court overturns a Hinds County Court’s decision which deemed the governor’s partial veto of House Bill 1782 unconstitutional. The portions of the bill in question sought to set aside $2 million for North Oaks Regional Medical Center in Tate County and $6 million for the MAGnet Community Health Disparity Program.

The lawsuit filed by Speaker of the House Philip Gunn and Speaker Pro Tempore Jason White argued that the governor overstepped the bounds of his office, but the Supreme Court disagreed.

In their opinion, the court referred to section 73 of the Mississippi Constitution, which reads “the Governor may veto parts of any appropriation bill, and approve parts of the same, and the portions approved shall be law.”

“We reverse the chancery court’s judgment and render judgment for the Governor, declaring that the veto of parts of House Bill 1782 was lawful under section 73 of our Constitution. No motion for rehearing will be allowed in this case, and the Clerk of this Court is directed to issue this Court’s mandate immediately,” the court concluded.

As noted in the court’s ruling, Gunn and White will not have the ability to appeal.

Anyone wishing to read all 55 pages of the court’s opinion can do so by clicking, here. 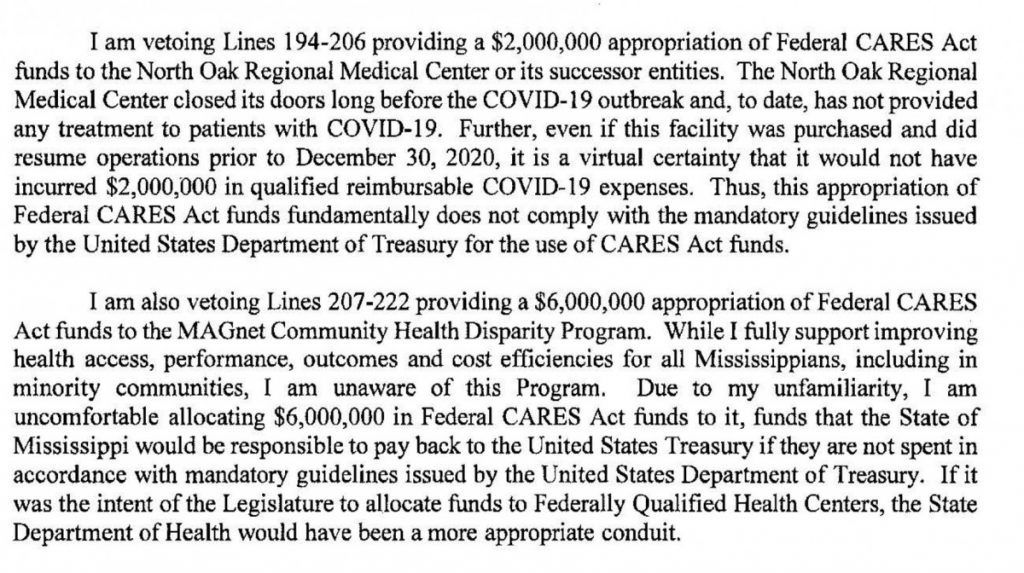