Note: The following is an op-ed by Dr. Rick Gilbrech, director of NASA’s Stennis Space Center near Bay St. Louis, Mississippi, written in response to release of the NASA Economic Impact Report – FY19.

NASA had a problem in 1961. The agency had selected a large area in Hancock County, Mississippi, to build its propulsion test site. Unfortunately, building the much-needed site would require relocating more than 600 families, some of which were not happy with the news.

On Nov. 1, 1961, NASA and other leaders gathered in one of the local Hancock County communities to meet with residents. The gathering proved pivotal as the leaders called on residents to trust that all was for the best and would work out well.

That meeting proved to be the cornerstone for an enduring and invaluable partnership between NASA’s Stennis Space Center, now the nation’s largest rocket propulsion test site, and its surrounding communities. Stennis and its related communities have grown and worked together for almost six decades, each supporting and benefiting from the other in a multitude of ways.

I thought of that history and partnership recently when NASA released its newly-commissioned Economic Impact Report 2019. The report is a highly credible look at the space agency and what it means to the nation. It was compiled by the Nathalie P. Voorhees Center for Neighborhood and Community Improvement at the University of Illinois at Chicago, widely recognized as one of the foremost organizations conducting economic impact studies for corporations, communities, and government agencies.

The economic impact of NASA outlined in the report can only be described as “comprehensive.”

According to the detailed look, all 50 American states and the District of Columbia see economic benefits from NASA and its research, development, and space exploration work. Overall, the agency generated a total economic output of more than $64 billion in the 2019 fiscal year, supported more than 312,000 jobs and totaled almost $7 billion in federal, state, and local tax revenues.

That is not all.

The agency is committed to transferring its developed technologies, products, and processes to private companies and everyday life. In the 2019 year, that meant generating 1,839 new technology reports, filing 85 new patent applications, receiving 122 patents and entering into 2,692 software usage agreements.

You see why I chose the word “comprehensive.”

Mississippi benefits greatly from NASA-related work. As the study indicates, NASA and its various missions, including the Moon to Mars initiative now underway, generated the following for the Magnolia state:

Mississippi truly stands on the front lines of NASA’s missions, especially as Stennis tests the engines and propulsion systems for the new Space Launch System rocket that will power those Moon to Mars missions of tomorrow.

For the state – and the entire nation – the economic impact is real, not to mention the importance of the agency’s scientific and technological advances and everyday improvements to life. The entire NASA agency receives less than half of 1 percent of the annual U.S. budget but uses this small taxpayer investment to produce tremendous returns.

Yes, NASA has kept its word – in Mississippi and across the nation. It has carried the entire country to the Moon and to the reaches of our solar system. It has improved daily life in countless areas and ways. It has provided groundbreaking advances in science and related fields. It has inspired entire generations to learn, dream, and reach.

Dr. Rick Gilbrech has served as director of NASA’s Stennis Space Center since 2012, after serving in the same role in 2006-7. As director, he is responsible for implementing NASA’s world-class rocket propulsion test program. He also provides executive leadership, direction and management of a federal center home to more than 5,000 employees and 50 federal, state, academic and private organizations and companies. 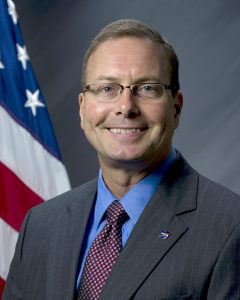