NASA is set to begin a new round of tests for development of RS-25 engines that will help power the agency’s Space Launch System (SLS) rocket on future missions to the Moon and, eventually, Mars.

The first test of the new series is set for today on the A-1 Test Stand at Stennis Space Center near Bay St. Louis, Mississippi, and will be streamed live on NASA TV.

The seven-test series will use RS-25 developmental engine No. 0528 and will provide valuable data for Aerojet Rocketdyne, prime contractor for the SLS engines, as it begins production of new RS-25 engines for use after the first four SLS flights. Operators will focus on evaluating new engine components and reducing risk in engine operation. They also will fire the engine through a range of operating conditions to demonstrate and verify its capabilities.

The upcoming test series will provide data to enhance production of new RS-25 engines and several engine components that are being manufactured with cutting-edge and cost-saving technologies. Operators also will demonstrate engine gimbaling capabilities, using a newly installed A-1 Test Stand thrust vector control system. “Gimbaling” refers to how the engine must move on a tight circular axis in order to ensure proper flight trajectory.

“We’re going to evaluate these newly designed parts that were made using advanced manufacturing techniques,” said Johnny Heflin, SLS liquid engines manager at Marshall Space Flight Center in Huntsville, where the SLS Program is based. “This test series will prove that the RS-25 production restart engines can be built with the same high performance but with more affordability. This is a big milestone that will greatly contribute to the future sustainability of SLS.”

“It is exciting to return to hot fire testing at the A-1 Test Stand,” Stennis RS-25 Project Manager Chip Ellis said. “We have worked hard the last 20 or so months to complete needed test stand maintenance projects. Now, the team is ready to get back to the business of testing for future deep space missions.”

The engine will be fired seven times for a total of 3,650 seconds during the first half of 2021. The schedule calls for six full-duration tests of about eight and a half minutes (500 seconds) and one hot fire of just under 11 minutes (650 seconds). A full duration test refers to the time the engine must fire during an actual launch in order to power SLS towards orbit. Longer duration hot fires are conducted to test the limits of engine performance.

For about half of the firing time, the engines will operate at 111 of the power level at which the original space shuttle main engines were designed to perform. Operators will also demonstrate operation at the 113 percent power level for an extended period, as was initially demonstrated in a Feb. 2018 hot fire.

The previous round of RS-25 testing concluded April 4, 2019 and focused primarily on validating new operating parameters for the initial RS-25 engines, which are modified heritage space shuttle main engines, and included acceptance testing of 16 former space shuttle main engines that will help launch the first four SLS missions. This new RS-25 test series begins as a separate test series, called Green Run, is in its final phase. The Green Run is a comprehensive series of tests of the core stage of the SLS rocket, which includes four RS-25 engines, and culminates with a final test to fire all four together for about eight minutes. The Green Run team recently fired all four RS-25 engines together for the first time and is currently evaluating if a second hot fire test is required. 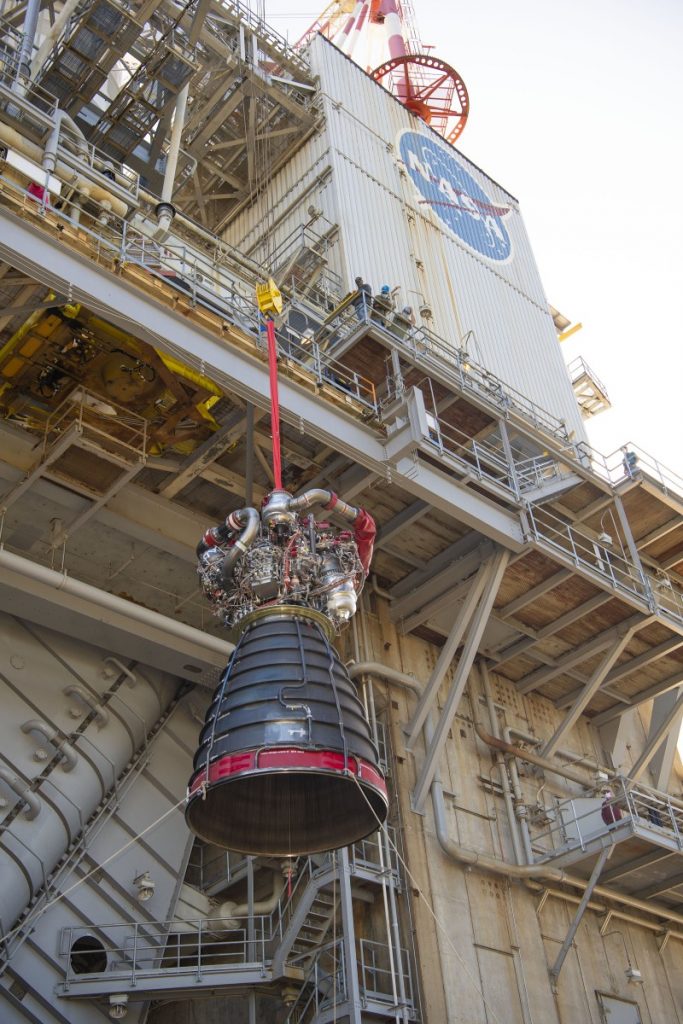