The Mississippi Department of Archives and History (MDAH) has transferred the remains of 403 Native Americans and eighty-three lots of burial objects to the Chickasaw Nation.

This is the largest return of human remains in Mississippi history and the first for MDAH.

“This repatriation is a huge milestone for our institution and our Tribal partners,” said MDAH director Katie Blount. “We are committed to the repatriation of human remains and cultural objects in the department’s archaeological collections.”

Since the nineteenth century, archaeological excavations have unearthed hundreds of the ancestral remains of people who once inhabited the state and whose cultures continue today. The passage of the 1990 Native American Graves Protection and Repatriation Act (NAGPRA) gave Native populations the right to claim ancestors and cultural objects in the care of institutions receiving federal funds.

Working closely with Tribal representatives and the National NAGPRA Program, the transfer of these human remains took place over the course of more than two years. MDAH sought guidance in preparing the remains for reburial, which will take place this year.

“The Chickasaw Nation has developed a strong working relationship with MDAH as a result of this repatriation,” said Amber Hood, Director of Historic Preservation & Repatriation, The Chickasaw Nation. “Caring for our ancestors is extremely important to us, and we appreciate the dedication and transparency their staff has shown throughout the consultation process.”

“It is important to remember that these are people, buried with items with strong cultural ties to their communities, the same way that people today might be laid to rest wearing a wedding band,”  said Meg Cook, MDAH director of archaeology collections. “While these artifacts inform the archaeological record, it is our ethical and legal obligation to see that they are returned.”

MDAH is thankful for its volunteers, who hand-sewed muslin bags that were used to carefully wrap each individual with their belongings. This material was purchased partly with funds from a National NAGRA Program grant. 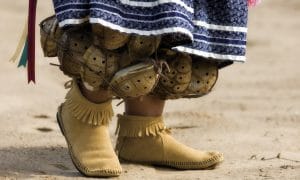