The following is an op-ed written by Chef and Mississippi restaurant owner Robert St. John regarding the impact of the pandemic on the industry and the need for Congress to approve aid for small and independent restaurants through the Restaurants Act.

In a few days, I will enter my 40th year in the restaurant business. Just over 33 of those years have been as a restaurant owner. I fell backwards into this business. Though from the first moment of the first shift, of the first day I worked in a restaurant, I knew I wanted to own my own restaurant, and make this line of work my lifelong career. I have loved every challenging moment of it. However, on one afternoon this past April I sat down with my wife, 22-year-old daughter, and 18-year-old son and told them that there was a strong possibility I would lose some, or all, of the six restaurants and two bars we owned in Hattiesburg, Mississippi. In the same conversation, I told them that there was also a strong chance we would have to sell our home.

Over the four decades that have covered my business career, I have had many difficult and challenging conversations— with bankers, lawyers, partners, suppliers, and occasionally guests. Though I had never had a conversation as sobering as the one that informed my children that my primary source of income and the house that they grew up in might vanish because of an uncontrollable virus whose path of destruction seemed to be changing daily. Life as we knew it was about to be over on several fronts.

In mid-March, we served the last meal at the Purple Parrot Café, the flagship restaurant I opened in 1987. At the time we didn’t know it would be the final meal ever served in that dining room. Then, within a matter of three weeks, almost every independent restaurant was forced to close. Like many of my fellow independent restaurateurs, we did it gladly, out of a patriotic duty to our country, and with a strong desire to ensure the health of the American public.

In walked the Independent Restaurant Coalition.

One morning I received a text from a friend who told me that there was a group of independent restaurateurs who were planning on getting together to see what they could do to save the industry. I was interested. Actually, I was desperate.

The Independent Restaurant Coalition was born sometime around the middle of March. The first Zoom call I joined was on March 19th. In that meeting, there was a stellar group of chefs, owners, sommeliers, managers, and suppliers. They represented independent entities from Brooklyn to Los Angeles, Portland to Charleston, and even a small-time restaurateur from the Piney Woods of South Mississippi.

In the early days of the pandemic, we met twice a day, seven days a week via Zoom. At the time the Paycheck Protection Program seemed as if it was going to be a lifesaver and so we advocated for that, but by the time everyone learned that the virus wasn’t going away by Easter, the collective wisdom at the IRC knew that— even with an extension of PPP benefits— industry-specific legislation targeted to the restaurant industry would be needed if Washington had any hope of saving the 11,000,000 independent restaurant jobs and the 5,000,000 ancillary jobs (farmers, fishermen, suppliers, truckers) that encompass the country’s second-largest private employer behind healthcare.

The airline industry had already received industry-specific aid even though they employ a fraction (700,000) of the small business owners who make up the independent restaurant industry, so there was a glimmer of hope.

As the “Two Weeks to Stop the Spread” kept adding weeks, cases skyrocketed, death rates grew, and restaurants began closing permanently, two disparate legislators— from two vastly different regions of the country— Representative Earl Blumenauer (D-OR), and the senior senator from my home state, Senator Roger Wicker (R-MS), chairman of the Commerce Committee introduced complementary legislation in their respective chambers. By then it was apparent that what had been perceived as a 24-week problem was, at best, an 18-month catastrophe for the independent restaurant industry.

Unfortunately, the national election began to take precedent and it seemed as if neither side wanted to give the other a win. The Senate bill stalled. In the meantime, the situation for the 500,000-plus independent restaurants in the United States worsened by the hour. PPP funds began running out, and— as the weather grew colder in certain areas of the country— restaurants that had heretofore limped along by offering outside dining began shuttering their doors, permanently.

That is where we stand today. Across the country, dozens of restaurants are going out of business for good and all, every day. Washington is in a stalemate and the independent restaurant industry is facing Armageddon. One in six restaurants has already closed. It is estimated that another 85% may close permanently. A few weeks ago, we were down 2,000,000 jobs since the initial shutdown, but that number has been snowballing for weeks.

It’s the worst time in the history of the restaurant business to be in the restaurant business, but we are used to adversity. We restaurateurs aren’t used to asking for anything. We’re in a brutal business. We chose it. We love it. We handle adversity multiple times, daily. The financial crisis of 2008 came and went, our sales tanked, and no one heard a word from us. We deal with hurricanes, tornadoes, and wildfires and, in their aftermath, we just roll our sleeves up and do the work it takes to reopen.

Independent restaurant owners need a lifeline during this once-in-a-hundred-years pandemic, and we need it yesterday.

If one owns a boutique or a sporting goods store, they may open at 9:00 AM and close at 9:00 PM. All throughout the day customers trickle into the business and purchase their goods. The restaurant business model is much different. A typical restaurant opens at 11:00 AM and we have a tight window from 11:30 AM until 1:00 PM to garner all of the sales we will make during that lunch period. It’s an intense, stress-filled, and exciting 90-minute window. It’s the same at dinner, the meat of which typically occurs from 7:00 PM until 8:30 PM. Restaurateurs average about three hours a day for potential sales.

When seating capacity is reduced by 50% for that three-hour sales opportunity it becomes an unworkable business model going forward. I would venture to guess that 80% of restaurants cannot survive under a 50% seating-capacity model for more than a couple of months. Yet we are almost nine months into this pandemic, with no discernable end in sight.

A few more weeks with no revenue will forever shutter most independents. The CARES Act temporarily stopped the bleeding. What congress does next in addressing the precarious comeback of independent restaurants will determine if they— and the 11 million they employ— will exist in the world going forward.

Independent restaurants are the lifeblood of our communities. They are where the community gathers to share a meal. We are also the entry-level industry. When people climb out of government dependence many get their start in restaurants. Independent restaurants breed small business owners. Steve Andrews started working with me as a prep cook in 1987. His wife Stacey joined the team as a hostess. They married and worked their way into management in our company. Since 2011 they have been my business partners and now own one-third of our Italian concept, Tabella. That’s what independent restaurants deliver— the American dream.

Nine months into this pandemic I have permanently closed two of our restaurants and a bar. We aren’t being forced out of business by a natural disaster or a financial crisis. We are being forced to scale back— and in many cases across the country close our doors— by state and local governmental agencies. It’s time that we independent restaurateurs do the thing that we are not used to doing and ask for help. Our survival depends on the swift passage of the RESTAURANTS Act in the Senate. Don’t let anyone tell you any different.

If you own a restaurant. If you work in a restaurant. If you dine at restaurants, we need you, and we need you this week. Go to the Independent Restaurant Coalition’s website www.saverestaurants.com and sign our letter. If your congressperson or senator has signed on to our legislation, send them a short thank you note. If your congressperson or senator hasn’t, please ask them to join us and save the nation’s number two employer by signing on to this legislation, today. Time is running out. We are facing the end of the independent restaurant business as America knows it.

The post Op-ed from Chef Robert St. John: Time is running out for independent restaurants appeared first on News Mississippi. 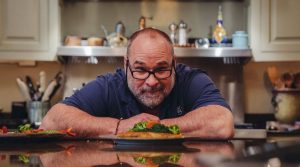