There were 19 original crew members on board.  Six were rescued, six were later found deceased. As of Thursday, seven were still missing.

On Monday, the Coast Guard announced they were suspending their search.

In the meantime,  the United Cajun Navy and others have stepped in to help search for those unaccounted for.

In a Facebook Live video on Thursday, Ronnie Adams, of the History Channel’s “Swamp People”, was joined by Scott Daspit, the father of Dylan Daspit, who is among the missing.  Both men became emotional as they asked for prayers.

According to WVUE in New Orleans, United Cajun Navy President Todd Terrell says his crews have two seaplanes in the air looking for any signs of crewmembers from the capsized vessel. He says they are searching an area south of New Iberia in the Gulf of Mexico where some debris from the lift boat has appeared in the last couple of days, some 60 miles from the original crash site.

“We found a life raft and parts of the vessel itself a few days ago and we’ve been searching that area,” Terrell says.

The National Transportation Safety Board will lead the investigation, which could take 12 to 24 months to complete. 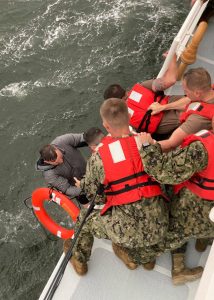