Congressman Michael Guest has joined as an original cosponsor of H.R. 38 – The Concealed Carry Reciprocity Act.

“This is a common-sense bill that simplifies American citizens’ Second Amendment right to bear arms,” Guest said. “If two states offer conceal carry permits, citizens of each of those states should be able to freely travel back and forth while exercising their Second Amendment right without restraint. With this legislation, we are untangling the confusing hoops that gun advocates have to jump through to feel safe as they travel.”

H.R. 38 is led by Congressman Richard Hudson of North Carolina.  “Our Second Amendment rights do not disappear when we cross state lines, and H.R. 38 guarantees that,” said Rep. Hudson. “The Concealed Carry Reciprocity Act of 2021 is a common-sense solution to provide law-abiding citizens the right to conceal carry and travel freely between states without worrying about conflicting state codes or onerous civil suits. I am especially proud to have such widespread and bipartisan support for this measure and will work with my colleagues to get this legislation over the finish line.”

The legislation would also extend the validity of state-issued concealed carry permits to the National Park System, the National Wildlife Refuge System, and on lands administered by the Bureau of Land Management, U.S. Forest Service, Army Corps of Engineers, and Bureau of Reclamation.

The legislation received support from across party lines. “The Constitution is something that Democrats and Republicans can agree on, and I’m glad we can find common ground with some of our friends across the aisle on the Second Amendment,” Guest added. 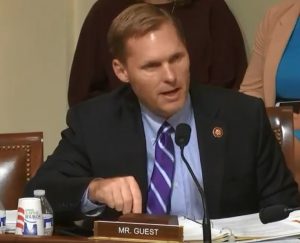