The committee-passed legislation outlines America’s military priorities and national security interests for the coming years. “The Senate Armed Services Committee reported a strong, bipartisan proposal for our national defense that would provide our military men and women with the tools and resources they need to keep us safe,” Wicker said. “I thank Chairman Inhofe and Ranking Member Reed for their tireless work to ensure the NDAA advanced on time despite the extraordinary circumstances facing our nation.”

“In Mississippi, this proposal would have a major impact. I was glad to see that the final proposal includes strong support for shipbuilding and military manufacturing and provisions to upgrade our state’s military bases,” Wicker continued.

The legislation would authorize a topline figure of $740.5 billion for national defense, consistent with the 2019 bipartisan budget agreement. Among other provisions, it would also provide a 3 percent pay raise for all members of the armed forces and $21.3 billion for the U.S. Navy’s shipbuilding plan.

The Senate’s defense proposal would: 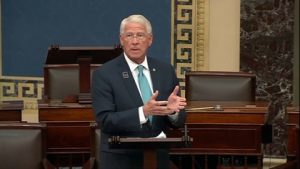