Mississippi Congressman Bennie G. Thompson, Chairman of the Committee on Homeland Security, released the following statement on the breach at the U.S. Capitol on Wednesday:

What occurred yesterday at our nation’s Capitol was – pure and simple – domestic terrorism incited by President Trump, his enablers, and those seeking to overturn the results of a legitimate election. January 6, 2021 will go down in history as the date that an angry mob of domestic terrorists and insurrectionists illegally tried to prevent our elected representatives from fulfilling their constitutional duty in the orderly transfer of power. It was a sad day for our democracy. The public should rest assured that those of us charged with protecting the homeland will do our utmost to ensure that these terrorists and insurrectionists are held to account and that security is bolstered to guard against future attacks.

This domestic terrorism attack on the Capitol will go down one of the worst security failures in our nation’s history. It was also the predictable realization of the Trump Administration’s reckless and willful ignorance of the threat posed by white supremacist extremists and other right-wing terrorists. It was well known that extremist groups, some of whom desire to foment civil war, were planning violence. Nearly twenty years after 9/11, we still clearly have massive gaps in the Federal government’s terrorism preparedness and response capabilities that must be immediately addressed. In addition, it could not be more stark and damning to contrast the Federal police response to violent gun-wielding domestic terrorists storming the Capitol yesterday with the treatment of migrant families at the border and peaceful Black Lives Matter protestors.

There must be a thorough Congressional investigation into the clear and massive breakdowns in preparedness and response. My Committee has been examining the threat from domestic terrorism, right-wing extremism, and white nationalism for ten years and this will be at the top of our agenda for the new Congress.

Never in my life did I ever expect to see a sitting President incite violent extremists at a rally and, after they stormed both the House and Senate chambers, raised the Confederate flag, and erected a noose, tell them in a video that he loved them.

Though it has been apparent for years, it is more clear than ever that President Trump is a direct threat to the homeland each remaining minute he is in power. He must be removed from office immediately. 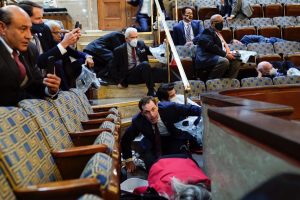