The following was submitted by U.S. Senator Roger Wicker

Each year on November 11th, our nation honors those who have served in the U.S. military. We show our appreciation through parades, ceremonies, and simple words of thanks. The opportunity to cast ballots in the recent election is one reason to be thankful for those who have defended our freedoms. As we continue to deal with the coronavirus, Veterans Day celebrations may look different from previous years, but our gratitude for our veterans has not changed.

Not long ago, I was privileged to help a family recognize their father, a World War II veteran, with a Bronze Star Medal on his 100th birthday. This man, Bill Allen, served as an Army platoon leader in Europe and fought courageously under enemy fire. When his family contacted my office earlier this year, my staff and I assisted with their application, and he received the medal in a surprise ceremony in Ridgeland. Mr. Allen and veterans like him deserve our praise and recognition.

Keeping Promises to Our Veterans

One of my top priorities in Congress has been improving the quality of life for our veterans. This has come into focus recently as many of our nation’s retirement homes, including the Armed Forces Retirement Home in Gulfport, have grappled with the coronavirus. I am determined to make sure federally-run retirement homes have the resources needed to keep our retired veterans safe.

I have also worked to reform the Department of Veterans Affairs, which for years failed to provide veterans with the care and respect they deserve. I supported the VA MISSION Act to improve health care access for our veterans. This law has reduced wait times by cutting red tape and removing restrictions on telemedicine and private care. I also supported the VA Accountability and Whistleblower Protection Act of 2017, which allows the VA to fire employees for bad performance. More recently, I have supported bills to boost benefits for World War II veterans, expand mental health services for all veterans, and provide compensation to veterans who were forced to retire early because of disabilities.

I have been deeply concerned about the growing number of suicides among veterans and service members, which have continued to spike during the pandemic. In 2015, I wrote a law requiring service members to receive yearly mental health screenings, providing early help for at-risk individuals. And this year I led a bipartisan effort with Sen. Tim Kaine to designate September 30 as National Veterans Suicide Prevention Day. We need to raise awareness about the invisible wounds suffered by our veterans.

We also have an obligation to meet the practical needs of military families. This year, I helped write the annual National Defense Authorization Act, which the Senate passed for the 60th year in a row. This legislation, which awaits action by a House-Senate conference committee, would give a three percent pay raise to our troops, expand services for military children with special needs, and make it easier for military spouses to gain employment in licensed professions. I also support the military’s decision to create a “bill of rights” for those living in military housing. Military families, like those experiencing mold problems at Keesler Air Force Base, should benefit from this new policy.

I will always work to put our veterans and military families first. As an Air Force veteran, the son of a World War II veteran, and the father of an Air Force officer, I appreciate the sacrifices our service members make to keep us safe. As we approach Veterans Day, I join all Mississippians in thanking our veterans for their service. 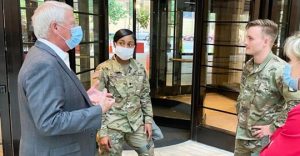