Wicker said, “Americans have been deeply disturbed by the chaos that has unfolded lately on our city streets. One of the more recent scenes erupted in Chicago, where a misunderstanding with police devolved into gunshots and violence. By the early morning hours, looters were pillaging Best Buy and Old Navy outlets, local restaurants, and mom-and-pop stores – all in the plain sight of television camera crews.”

“These scenes of upheaval have become all too familiar. In Seattle, anarchists took over six downtown blocks and declared themselves a police-free zone,” said Wicker.  “In Portland, rioters attacked a police precinct and an arsonist threw an explosive into a U.S. courthouse. In these and many other cases, police have not been allowed to do their job, leaving local residents at the mercy of the mob.”

Wicker stated that these lawless acts have no place in a civilized society and need to be dealt with swiftly. “Tolerating this behavior will only lead to more mayhem and injustice,” said Wicker.  “President Trump has admirably stepped up and warned that if city mayors do not establish order, federal forces will be sent in to protect American life and property. The President’s support for law and order is indeed welcome, but it is a shame that some mayors need prodding to restore the rule of law.”

“City residents are desperate for police protection. Unfortunately, a growing number of politicians are working to defund the police and undermine law enforcement. This idea is absurd, and Americans know it – polls show that 73 percent of the country is against cutting funds for police,” said Wicker.  “Despite this overwhelming majority, some members of Congress have called for diverting federal dollars away from police departments. The American Civil Liberties Union even called for the Department of Homeland Security to be abolished. Senate Republicans are determined to block any such proposals.”

Wicker noted that some local governments are already putting these dangerous ideas into practice. “New York Mayor Bill de Blasio pushed through a $1 billion cut to the NYPD and trimmed his police force by over 1,000 officers. Seattle took a similar path and cut $4 million from its police budget. In response, Seattle Police Chief Carmen Best, the first African American woman to hold the job in the city’s history, resigned and said the cuts reflected an “overarching disrespect of the officers.” And in perhaps the most radical effort, Minneapolis City Council members are seeking to dissolve the city’s police force altogether,” said Wicker.

Wicker stated that securing public safety is among the most basic responsibilities of any government. “In fact, it is the very reason government was created. For thousands of years, people have organized themselves into tribes and political communities to protect against attacks on their lives and property. As John Locke once put it, “where there is no law, there is no freedom.” Law enforcement is indispensable because it ensures that our rights and freedoms are protected,” said Wicker.

Wicker said, “There are legitimate concerns today about police misusing their authority, and I have cosponsored Republican Senator Tim Scott’s JUSTICE Act to bring about helpful reforms. Unfortunately, Senate Democrats blocked this bill from even being debated. This cost us a valuable opportunity to address an issue of importance to many Americans.”

In closing, Wicker said he hopes no one actually believes that today’s rioters are seeking legitimate reforms or justice of any kind. “Their actions create new injustice and put our citizens at risk. As the President works with local authorities to bring calm and security to our city streets, I will continue working to support law enforcement in all levels of government.”

The post Wicker: Defunding Police is a recipe for disaster appeared first on News Mississippi. 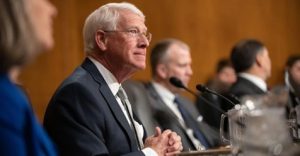